The gift of fear…. can save your life 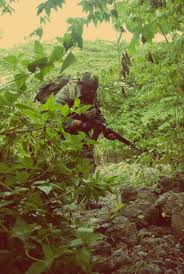 It remains a vivid memory.

On convalescent leave from the Long Beach Naval hospital after being medevaced from Vietnam, I accompanied a friend to his bank. As he opened the door and I followed him in, a motorcycle backfired only 10 feet behind us.

Mike continued on, but I was literally on the floor in one of the bank lobby green foliage areas; naturally the bank customers all turned to look at the door when the backfire occurred; who knows that they thought.

My heart raced. I was angry and self-critical for a few seconds as I got to my feet; I wanted to explain to the the civilians why I was on the floor, while knowing of course that they didn’t “get it”.

“Yeah, but if the loud noise had been something else,” I said to myself, “I’d be alive and they’d be dead.

The “hyper-vigilence” I believe saved my life 40 years ago continues to serve me well; I have found a kindred spirit in Gavin de Becker, author of “The Gift of Fear” and an internationally-recognized expert in violence and human beings’ victimization and reaction to it.

Buy this book and make everyone in your family read it… here.

De Becker’s message, his passion, is that your intuition, the visual and auditory scanning of ones environment, can save your life if your snap out of your potentially fatal belief that “it can’t happen here”… “it was probably nothing.”

I was seated in a Denver restaurant for breakfast one morning when for some reason I became intensely aware of the conversation between two men in the next booth. My intuition said, “get up and go.”

Was there a mass casualty murder later in that Denny’s? No. Was I worried about upsetting the waitress… not eating… wasting my time?

I learned very long ago to listen to that inner voice that de Becker insists we must all heed:

“The solution to violence in America is the acceptance of reality.”

What do we tell our children about their intuition and their safety?

“Don’t be afraid of clowns… they’re funny and won’t hurt you.”

“If you’re in trouble go to the nice policeman, he’s our friend.”

Ex-cop is a serial child molester

De Becker is unyielding on this… as a society we contribute to our own victimization and we raise our children to follow suit.

It doesn’t take a genius to understand the value and rationale in that instruction.

Despite being a “noted historian” according to some, and despite four presidential assassinations–RFK, MLK,George Wallace–and numerous failed attempts, Newt Gingrich just yesterday sat on his fat ass at a book signing as a left-wing homo reached into a bag… REACHED INTO A BAG… and tossed confetti all over him, and his wife.

He never moved or even attempted to protect his wife.

Rep. Giffords and 18 Shot Near Tucson

President Bush ducked and damned near fielded not one, but two two shoes thrown at him by a raghead… in RAGHEAD LAND. Did he think “grenade”, “acid”, “hypo needles”… ?

Nope, as far as I could see, he never moved.

Voice, posture, having ones head “on a swivel” serve as our our innate protection weapons. Who is more likely to get mugged, car jacked or worse….?

The woman with her head up, scanning the area with her largest key clutched pointing out of a closed fist, or the head down, rummaging through her purse, slow, distracted woman bent over her trunk loading groceries?

There was also a sentence from these (de Becker’s book’s) passages that really sticks with me.

I’m paraphrasing: The man who truly wants nothing from you will not offer assistance or approach you.

This was hard for me to hear. I take pride in being a gentleman, but I have to admit that there is truth in the above statement for me. The motives need not be bad in order for the statement to be valid.

It’s true… I make a habit of helping others, particularly women and specifically older women. But I must admit my secondary gain is that it makes me feel good to help and perhaps others will take the example.

If you can impart one thing to the women in your life it’s this:

Those people can end up dead.

Volunteer coordinator for veterans support network in North Texas. Now retired from his private psychotherapy practice, I specialized in the diagnosis and treatment posttraumatic stress, working with victim assistance programs, veterans and the Veterans Administration for over 20 years. After being wounded in action in Vietnam, I was medically retired from the Marine Corps and know first hand many of the readjustment difficulties and psychological stresses experienced by today's OIF and OEF veterans. I am available, at minimal cost, to speak at your functions on several subjects including veterans issues, Vietnam, the Medal of Honor, Posttraumatic Stress Disorder and critical incident debriefings.
View all posts by Gary Alexander →
This entry was posted in Family, friends, Heroes, Psychology, Second Amendment. Bookmark the permalink.

6 Responses to The gift of fear…. can save your life