Liberal white guilt will get you killed… 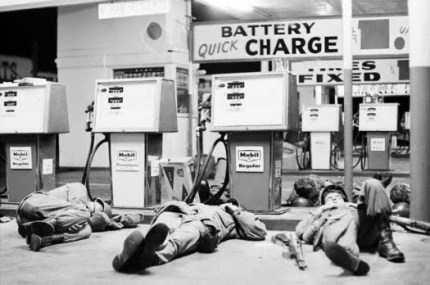 In the summer of ’65 I was working at a Texaco station just off the 605 in Pico Rivera about 15-20 minutes from Watts. For the better part of a week the whole area was twitchy as blacks rioted over a cop arresting a drunk driver.

Fire trucks protected by M60-armed National Guardsmen repeatedly sped past my corner on the way to hell. By the time the riot subsided, 34 people had been killed, 1,032 injured, and 3,438 arrested. It would stand as the most severe riot in Los Angeles history until the Los Angeles/Rodney King riots of 1992 during which property damages topped roughly $1 billion; 53 people were killed and thousands more were injured. 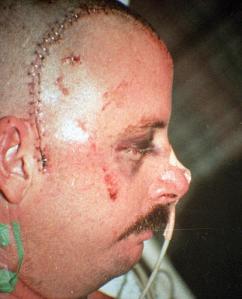 Watts and the later King riots set in concrete the racial insanity which dogs us to this day… whenever blacks feel ill-treated for any reason, they to take to the streets and focus their racial hatred on white citizens; they attack, destroy, maim and murder. Reginal Denny (left) was nearly beaten death in 1992 by black sub-humans who got off lightly thanks to an “O.J. Simpson” jury.

It turns out that John Edwards was right… there are “two Americas”; one is made up of hardworking, tax-payers who carry the entire burden of a socialist state and believe in this great nation… the other is comprised of everyone else.

Throughout the major cities of the United States these scumbags form a ready and eager  cannon fodder for the radical left agitators from ACORN, SEIU and other union criminals, while the Obama Regime continues to stoke the fire with attacks on the “millionaires, billionaires and corporate jet owners”… thinly-veiled code for whites.

By long-planned design we now have a president whose daily agenda is to destroy the economy and divide us racially; his black attorney general refuses to prosecute Black Panthers for voter intimidation at the polls, or any blacks for hate crimes because they are “my people”. Obama puppet master George Soros‘ millions are behind virtually all radical-left groups who push the thugs into the streets…. these provocateurs are known as “community organizers”… Obama’s only known work experience before 2008.

It’s already happening throughout Western Europe, primarily in the UK:   Katharine Birbalsingh, who is black, writing in the UK Telegraph minces no words: “These riots are about race. Why ignore the fact?”

“Some of the black kids I used to teach will tell you that the riots are absolutely justified. A number of adults would agree with them. Everywhere I read that the protest was understandable because ‘people are very angry’.”

All this is the result of the general “The Cloward-Piven Strategy” about which I’ve previously written:

The strategy of forcing political change through orchestrated crisis. The “Cloward-Piven Strategy” seeks to hasten the fall of capitalism by overloading the government bureaucracy with a flood of impossible demands, thus pushing society into crisis and economic collapse.

Socialists of America who not surprisingly “taught sociology” at Columbia University (Piven later went on to City University of New York).

In a May 1966 Nation magazine article titled “The Weight of the Poor,” they outlined their strategy, proposing to use grassroots radical organizations to push ever more strident demands for public services at all levels of government. The result, they predicted, would be “a profound financial and political crisis” that would unleash “powerful forces … for major economic reform at the national level.”

Are the dots connecting?

Volunteer coordinator for veterans support network in North Texas. Now retired from his private psychotherapy practice, I specialized in the diagnosis and treatment posttraumatic stress, working with victim assistance programs, veterans and the Veterans Administration for over 20 years. After being wounded in action in Vietnam, I was medically retired from the Marine Corps and know first hand many of the readjustment difficulties and psychological stresses experienced by today's OIF and OEF veterans. I am available, at minimal cost, to speak at your functions on several subjects including veterans issues, Vietnam, the Medal of Honor, Posttraumatic Stress Disorder and critical incident debriefings.
View all posts by Gary Alexander →
This entry was posted in Left-wing radicals, Liberty Constitution, Race. Bookmark the permalink.

5 Responses to Liberal white guilt will get you killed…