The crisis that never was…. 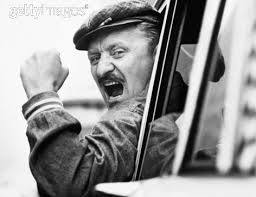 One thing I like about New Yorkers… their willingness to tell the boss to go to hell.

New York Mayor and noted dwarf, Michael Bloomberg, demanded that citizens flee the city because of a much hoped-for (by democrats and the media) disaster of Biblical proportion. He closed the subways and bus lines to ensure a greater level of Chinese fire drill-ed-ness as the dreaded Irene advanced on  the whole Gothamed City.

And an estimated 330,000 Yankee fans told him to piss up a rope and went to work as usual.

That’s who American are… not the cringing, bedwetting drones that democrats and the Obama Regime are trying to force us to be.

So the “piss off” also goes to the Least Qualified Man in Any Room He Enters yet again.

Obama: Getting through Irene will be ‘tough slog’

And speaking of… The Boy President even put away his XBox 360 and reluctantly left the links in The Vineyard for a campaign photo op taking personal control of the impending watery Armageddon.

He is shown in the little chair again just like he was when SEAL Team Six, under the capable direction of the CIA’s Leon Panetta and SecDef Robert Gates, cancelled Uncle bin’s last hala meal; for that photo all he had to do was sit there and “watch” an imaginary “real time” video of the assault. It’s what he do best.

And no this is not Monday morning quarterbacking.

Leadership is not defined by “Run Awaaaaay…..!!” as repeatedly uttered by The Pythons’ King Arthur when facing even slight danger.

Leadership is Jack Kennedy in the Cuban Missile Crisis.

Leadership is General McAuliffe saying “Nuts” to the Germans who demanded he surrender his command at The Bulge.

What we have in the White House is the most craven, whimpering son of bitch we’ve had since Bill Clinton.

Every day he is in office he is far from ineffectual, he is a constant threat to national security.

In the spirit of full disclosure, I opposed the MLK Memorial being placed on the National Mall. Try as blacks and left-wing honkies might, King doesn’t measure up to the like of Jefferson, Lincoln, Washington or the 58,000 on the Vietnam Veterans Memorial.

It’s similar what has happened to flying the U.S. flag at half-staff; it is often lowered for dumbass teens killed in car wrecks. It’s the highest national tribute there can be for an American in my book and should be reserved, without political influence, for such worthy individuals.

Okay… the Memorial itself also sucks because MLK as rendered  does look a little Asian, and in a way I can understand that. A Chi-com sculptor seldom gets to create anything other than Mao, so naturally it’s hard to do a round-faced, black guy without letting a little little Oriental in there.

“The waterfall runs into a crescent-shaped granite Inscription Wall that’s 450  feet long. On the wall are 14 quotations from King representing his  prescriptions for the Beloved Community that, I suspect, is what he’s gazing at  beyond the Tidal Basin.”

“Could the statue not have been made of granite from ‘the hilltops of New Hampshire,’ which King referenced in his ‘I have a dream’ speech, or Vermont, or any other U.S. state, rather than the (slave) quarries of Communist China?”

Naturally, when it comes to blacks and the constant use and abuse of MLK’s legacy it never ends:

One prominent chiseled quote reads, “I was a drum major for justice, peace and righteousness.”

But naturally the complete destruction of King’s “dream” is the following… and any time a King family member is involved, you know it’s going to be embarrassing, involve graft and corruption, and dumb as a post:

I give you the educated, refined and always appropriate daughter of the late civil rights leader, Bernice King:

Something like this would have been far more appropriate, but then whatta I know…. I’m a white dude.

Volunteer coordinator for veterans support network in North Texas. Now retired from his private psychotherapy practice, I specialized in the diagnosis and treatment posttraumatic stress, working with victim assistance programs, veterans and the Veterans Administration for over 20 years. After being wounded in action in Vietnam, I was medically retired from the Marine Corps and know first hand many of the readjustment difficulties and psychological stresses experienced by today's OIF and OEF veterans. I am available, at minimal cost, to speak at your functions on several subjects including veterans issues, Vietnam, the Medal of Honor, Posttraumatic Stress Disorder and critical incident debriefings.
View all posts by Gary Alexander →
This entry was posted in Politics, Race, Religion. Bookmark the permalink.

1 Response to The crisis that never was….