Moral malignancy in the heartland….

Pedophilia is an insidious disease that runs unchecked through and abetted by our permissive society.

In a career of 30-40 years a child rapist will average 150 victims or more, obviously some who prey on children victimize many hundreds.

I’ve taken several stabs at this post since the story broke, but each day’s revelations forced me toward greater rage and further from a summary of the lessons we must learn.

Child molesters, unfortunately, do not have an organized criminal profile. They come from all classes and backgrounds. Some might be married, some might not; some might prefer boys while others prefer girls. Sometimes they are attracted to young children, other times they may be attracted to older children. Most, however, share certain common characteristics, here are some: 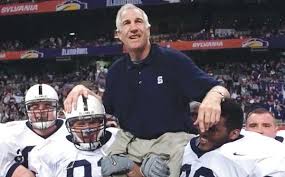 preferential treatment; and when the rich and powerul didn’t get what they wanted they destroyed those who opposed them. Worse, legions of cowards, co-conspirators, and enablers put personal gain far above the helpless they were morally obligated to protect.

From the president of the college to the trustees, to the athletic director to the coaches, their assistants and down to even the players and the janitors and finally even the students… they all aided and abetted child rape; they looked away, turned their backs, sold their souls and forfeited their humanity before Sandusky and the cult of personality founded by someone called “JoePa“ who reaped all the benefits while the small and weak were sacrificed.

There are no innocents….

Penn State, not the sub-human Sandusky alone, damaged an untold number of young boys who were seduced with the glamour of big-time college football and the sad and pathetic need for a male influence in their lives. Sandusky has been indicted by a grand jury on 40 sexual crime counts between 1994 through 2009.

Then there is  assistant coach Mike McQueary, then a Penn State graduate assistant, walked in on Sandusky who was raping the ten-year-old boy. Not only did he fail to stop Sandusky from contuing the assault on the child, he ran to call his daddy… then he waited until the next day to report it to head coach Joe Paterno.

In turn, Paterno supposedly informed his university superiors Athletic Director Tim Curley and Gary Schultz the Senior Vice-President Of Finance of the sexual assault and Sandusky got a wrist slap: he was told not to bring any more children from Second Mile to the football complex, an action that was also approved by school president Graham Spanier. This week’s grand jury indictment accused Curley and Schultz doing nothing, failing to tell the police, and also lying to the grand jury saying that that McQueary never informed them of any sexual activity.

Clearly Penn State was and is a society with no moral center, yet people pay millions to Penn State to teach their children.

What has Penn State turned out as a result?

Sandusky began is 30+ year coaching career at Penn in 1966. Eventually his victims will number in the hundreds; I’ll guarantee that his abuse of young boys began when he was a teenager. A big, strong, masculine role model for lost little boys lacking a father’s influence was the perfect cover.

Having established his cover and credibility in the Penn State community, Sandusky planned an elaborate phase two: in 1977 helped establish The Second Mile children’s charity in 1977 with some of the proceeds from his book, “Developing Linebackers the Penn State Way.”

Sandusky Made Nearly $500K At The Second Mile After Admitting He Showered With A Boy, According To Tax Records

Sandusky wasn’t charged in 1998, remember, but he did admit to hugging a boy while showering with him, which he further acknowledged was wrong. In 2001, The Second Mile started paying Sandusky an annual “consulting” fee of $57,000, according to the IRS records. The Second Mile only stopped paying Sandusky in 2009, after the charity also decided to stop Sandusky from camping out with young boys.

The CEO of the “charity” and a second staffer have received more than $2 million total in that time period…. what did they know, when did they know it and what did they do about it? Sandusky retired from The Second Mile in September 2010 as the noose began to tighten.

And now, perhaps the worst…; it will eventually be proven that Sandusky’s wife, Dorothy, mother of six adopted, three as infants and the other three as foster children, has known about his criminal behavior for decades.

She has been described as “devastated” by the indictments and that some of the children we assault in in the basement of the family home. What do their now grown children know?

Breaking now:  Why did Jerry Sandusky’s wife call abuse victim weeks before his testimony and how much did Dorothy and six adopted children know about Penn State ‘paedophile’?

It is impossible to believe that no one knew about any of this until the first official investigation of Sandusky 13 years ago (yet Sandusky was never prosecuted); he resigned abruptly at 55 (young by coaching standards)… no doubt the result of Paterno and others promising him a top to bottom cover up if he resigned.

Moreover, Sandusky was probably the premier linebacker coach in the NCAA, the number of NFL linebackers from Penn state bears that out. So If he “retired” in his prime at 55, why wasn’t he offered a single NFL coaching contract?

Because everyone in the NFL knew he was a pedophile… yet what did the NFL do with the information? How many NFL players coached by Sandusky over 30 seasons knew or suspected he was a child rapists? And none of them spoke up?

Who knew at the highest levels of the NCAA? How many “big games” did Penn State play, how many championships? Clearly the entire program should have received the NCAA “death penalty”, and anyone associated with the program criminally investigated. And yet the ancient Paterno was allowed to hang on until he recorded his 407th victory to claim the record for most wins in football history.

And as my friend Hap observes:

But what about the bowl games they did win, all the TV revenue? I cannot be convinced that among all these hundreds and thousands of interconnected people that no one in the NCAA knew.

In the Penn State case minors were repeatedly transported over state lines for criminal purpose.. why wasn’t the FBI called in; why hasn’t there been an independent investigation?

County District Attorney Ray Gricar came under fire because a 1998 report concerning Sandusky allegedly molesting two boys in a shower did not lead to charges. Under the scope of the findings of the 2011 grand jury, Sandusky admitted to taking a naked shower, touching a boy and asked for forgiveness. However, six weeks later, police closed the case.

Gricar disappeared on April 15, 2005. He told his girl friend he was going for a drive. His car was found in a Lewisburg, Pa. parking lot and his laptop missing its hard drive was located in the Susquehanna River, the Patriot News stated.

Gricar’s body has never been found and he was declared dead in July 2011.

What did he take with him to his grave?

Is it possible that only Sandusky and his co-conspirators like Paterno, and the Penn State hierarchy are involved in the systematic abuse of children or covering it up? If just one more, why not four, why not 20?

We know what happened in the Roman Catholic Church for hundreds of years and in some religious cults… why not the sacred, sycophantic world of college sports?

Soulless sexual deviates are not only being tolerated at Penn State and every other major university and college in the nation, they are protected by the “progressive” world of academia where no one is wrong, they’re just “different.”

Pittsburgh radio host Mark Madden wrote a story revealing Penn State and was early with the story, said recently “I can give you a rumor and I can give you something I think might happen,” Madden told a radio interviewer. “I hear there’s a rumor that there will be a more shocking development from the Second Mile Foundation — and hold on to your stomachs, boys, this is gross, I will use the only language I can — that Jerry Sandusky and Second Mile were pimping out young boys to rich donors. That was being investigated by two prominent columnists even as I speak.”

And the child rape goes on.

Penn State is America, and sadly America has become Penn State through the degradation of our society; we have produced poorly challenged generations lacking in ethics, morality and courage…

… the kinds of people who will look the other way and allow the helpless to suffer.

Volunteer coordinator for veterans support network in North Texas. Now retired from his private psychotherapy practice, I specialized in the diagnosis and treatment posttraumatic stress, working with victim assistance programs, veterans and the Veterans Administration for over 20 years. After being wounded in action in Vietnam, I was medically retired from the Marine Corps and know first hand many of the readjustment difficulties and psychological stresses experienced by today's OIF and OEF veterans. I am available, at minimal cost, to speak at your functions on several subjects including veterans issues, Vietnam, the Medal of Honor, Posttraumatic Stress Disorder and critical incident debriefings.
View all posts by Gary Alexander →
This entry was posted in Crime, Homosexual agenda, justice, Left-wing radicals, Psychology. Bookmark the permalink.

7 Responses to Moral malignancy in the heartland….