Each year on this day I pause to remember a brave US Army unit who engaged an overwhelming enemy force and through  a combination of poor intel and costly battlefield over confidence, 209 officers and men fought to the death June 25, 1876… just days before America’s Centennial. 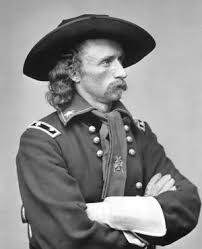 And so died the youngest and most storied cavalry officer in the Civil War and the Far West Command, Lt.Col George A. Custer.

Most of what America “knows” about Custer is bullshit; I hope that “Autie” would appreciate the garrison duty observation.

I’ve ground my teeth through more than my share of  pontifications by expert know-it-alls who got all their research from Little Big Man, bad TV “specials” and the horribly written and sourced “Bury my Heart at Wounded Knee”… which was so flawed that the Custer Battlefield Museum refused to sell it in its bookstore.

Pearls before swine…. I long ago stopped bothering to argue with or correct them; like the man said, “given the truth and the myth, people prefer the myth.”

Custer failed for one simple reason, he underestimated his enemy based on the numbers of braves reported by the the forerunner of the Bureau of Indians Affairs as residing peacefully on the reservation. Why was the estimate wrong? Because, like today’s federal government, the Indian Agents were the most corrupt federal employees east of the Potomac River. In truth the Indian Agents reported 800 Lakota men women and children led by Sitting Bull on the res; on that fateful day in late June, Custer’s Crow scouts would estimated the enemy force at between 1,500 to 2,500 warriors alone located on the banks of the Little Big Horn River –the largest concentration of Indians from six tribes that history has ever recorded.

James Donovan in his “A Terrible Glory“ insists that Custer “…. was unfairly characterized as rash and reckless, not just in this battle, but in general.  Yes, he was clearly flamboyant and perhaps even arrogant, but his judgment, while lightening quick, was usually well-considered and proved accurate as measured by his results.  These unfair accusations were mainly the result of self-protection (especially on the part of [Maj. Marcus] Reno) and the well-established way in which the military avoids blame for its disasters.”

Yes, in modern times Custer has become synonymous with failure…with quips and jokes and worse because he “divided his command” and attacked the Indian encampment midday on the 25th. As so often is the case, the truth is much different.

Custer’s envelopment or pincer maneuver, the “hammer and anvil“, is as old as Sun Tzu and had swerved the cavalry officer well in the Civil War during which he distinguished himself as (still) the youngest general in the history of the American military. At  promotion he was just 23 and just a few years out of West Point (USMA class of 1858).

Custer sent Maj. Marcus Reno left in a flanking movement; he personally took the right flank along a ridge and down into the valley while Capt. Frederick Benteen brought up the middle. Taking Companies C, E, F, I, and L, Custer intended to crush the Indians between his attacking troopers, left and right, with Benteen as the “anvil”.

But Benteen’s column was held up by the wagons and supplies and Reno’s attack was blunted by the an unexpected forceful charge from the numerically superior enemy; Custer’s second in command panicked, lost control of his men and all ran through the timber essentially indicating every man for himself.… the command disintegrated was cut down before it could reach the Little Big Horn; the survivors fled to the high ground where they combined forces with Benteen’s command, three miles from where Custer was making his so-called last stand.

In addition to the 209 killed at the Custer position,  69 were killed and 55 wounded in the battle for the Reno-Benteen position which went on  the rest of the 25th and most of the 26th.

In all the 7th Cav suffered 52 percent casualties: 16 officers and 242 troopers killed or died of wounds, 1 officer and 51 troopers wounded.

Every soldier in the five companies with Custer was killed (three Indian scouts and several troopers had left that column before the battle; an Indian scout, Curley, was the only survivor to leave after the battle had begun), although for years rumors persisted of survivors.

The sole surviving animal reportedly discovered on the battlefield later by General Terry’s troops was Captain Keogh’s horse Comanche, above. (Though other horses were believed to have been captured by the Indians.)

It was a devastating day for the Custer family.

Among the dead were Custer’s brothers Boston and Thomas, (a double Recipient of the Medal of Honor in the Civil War) and Custer brother-in-law James Calhoun, and his nephew Henry Reed.

In 1878, the army awarded 24 Medals of Honor to participants in the fight on the Reno-Benteen bluffs position for bravery, most for risking their lives to carry water from the river up the hill to the wounded.

Sitting Bull, contrary to public belief did not fight at the Little Big Horn and the credit for Sioux leadership over June 25-26 is rightly attributed to Gall and Crazy Horse, the latter who was unarmed throughout the battle, contuinuing to lead from the front . Most people have very little understanding of the Indians wars especially the Great Plains.

Far from being a wise, shaman “healers” along the lines of  fake enviro-Indian “Iron Eye” Cody here’s some of Sioux handy work:

This is the body of Sgt. Frederick Wyllyams, Troop G, Seventh U.S. Cavalry. He was killed and mutilated by a mixed band of Sioux, Arapaho and Cheyenne Indians near Fort Wallace, Kansas, 1867.

The ritual slashes on Wyllyams’ body were done after he was killed to indicate the tribal affiliation of the killer.

Robert McGee, was a civilian who survived a Sioux attack thought wounded and scalped by Chief Little Turtle, 1864.

Today much is made of the “oral history” Sioux account of the Custer fight; demanding historians regard such accounts speculative… the Plains Indians had no written language and it must be remembered that the warriors who participated in the massacre were understandable reluctant to talk and talk straight about having just dealt the Army its worst defeat in the Indian Wars.

The bill also authorized the creation of a cartoonish and inappropriate  Indian memorial to be located on Last Stand Hill near the mass grave of more than 150 U.S. troopers.

Sometime in the 90s I ended my membership in the CBHMA as the group continued to kowtow  to the Indians.

Below is another PC slap in the face of the Army–markers for the enemy- in this case a Cheyenne.

Soon an Indian was named superintendent of the battlefield; once in office he ordered the association’s historical plaque and name plate removed from Ralston’s “Call of the Bugle” painting located in the battlefield visitor’s center.

This terminated the 40-year partnership between the Association and the Park Service; the Indian superintendent’s attitude and arrogance almost destroyed the association’s support of the battlefield and often the Crow Nation’s attempts to a casino or a hotel/ restaurant/mobile home park or some other dignified project.

Because if it’s one thing Indians really care about is honoring the memory of American soldiers who died doing their duty, and lie buried under the hard Montana prairie.

Volunteer coordinator for veterans support network in North Texas. Now retired from his private psychotherapy practice, I specialized in the diagnosis and treatment posttraumatic stress, working with victim assistance programs, veterans and the Veterans Administration for over 20 years. After being wounded in action in Vietnam, I was medically retired from the Marine Corps and know first hand many of the readjustment difficulties and psychological stresses experienced by today's OIF and OEF veterans. I am available, at minimal cost, to speak at your functions on several subjects including veterans issues, Vietnam, the Medal of Honor, Posttraumatic Stress Disorder and critical incident debriefings.
View all posts by Gary Alexander →
This entry was posted in Medal of Honor, Military, Politics, Veterans, War. Bookmark the permalink.

28 Responses to Garryowen…. and God speed.