A couple of days ago I willingly engaged in a back-and-forth with a long ago public school friend of mine when he popped up on Facebook as he does every few months.

Steve (his real name) is a classic, knee-jerk liberal of the California variety not well-versed in his intellectual foundation and so must rely on being smug, holier than thou, and full of ridicule and hubris.

So Steve stopped by my Facebook page to ridicule a post concerning a new variant of the venerable 1911 pistol… a somewhat technical article about a military firearm; I linked it to a number of friends with similar interests.

Steve: “It’s expensive… but I am going to run out and by one for my son’s 16th birthday……Who cares about the money if it can save him from the black boots who will inevitably be coming for him.”

Like all libs Steve cannot debate an issue–any issue–in the straightforward; because he knows, like the Viet Cong, he cannot effectively mount a sustained firefight…. hit and run is best he can do.

I dusted him in short order as I always do but this carried some weight even with him:

“Steve: the gentlemen listed above, whom I’m privileged to have as friends, include fellow combat Marines, retired military officers and senior enlisted, Medal of Honor Recipients, distinguished marksmen, retired law enforcement officers, a card-carrying member of Mensa and a widely respected military author and journalist.”
The takeaway for me in this lopsided little skirmish was how proud and satisfied I am to live in the world of men such as those whom I’d introduced to Steve.

This doesn’t mean that I live in a world of high-octane, risk-taking, minimal thought and all action… on the contrary. I’m talking about a world in which my friends live the most important parts of being a man…. leader, protector, healer of wounds, first to answer the call, instructor; most are voracious readers and possess a multitude of varied interests.

In this group debating whether or not Nietzsche was full of crap is as likely as why in hell did Hitler stop the almost assured destruction of Britain and open the Eastern Front against the Soviets?

Men in my world are scholars and can ably discuss most every current event on a day-to-day basis…. why? Because we believe being forewarned is being forearmed.

In my world the only thought is “Who is still alive in there?”

In my world men wear head gear… they wear caps (veterans, NRA, John Deere) and Western hats (straw in the summer and felt in the winter), helmets, construction hard hats. They have calloused hands and despite advanced degrees, usually know their way around horses and aggressive dogs.

We (not all) drink whiskey, some chew and most are reformed smokers and and we condemn to the deepest levels of hell the enemies of our country and those who turn against us.

We believe that in the event America is invaded, a significant fifth-column of our fellow citizens would immediately rise and inform on the patriots for 30 pieces of silver… or a loaf of bread. 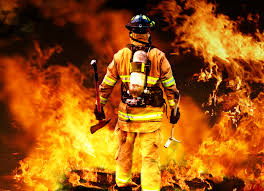 Most of us still cannot set aside the nagging possibility that the enemy may hit the wire any time, despite age and infirmity…. ours, not theirs.

We deeply fear as did the Founding Fathers, an all-powerful federal government. Over our many years and life experiences we learned to recognize danger from afar because recognizing it “danger close” does you no good.

All this is lost on the Steves of the world.

We find most people tiresome but do not say so; essentially we are taking count, silently rating them:  can they be counted on? And to do what?

I have numerous pairs of latex gloves in my truck (yeah, a big, burly 5.7 liter)… if you don’t know why I have them then we probably don’t hang out.

I cannot estimate the number of accidents at which I’ve rendered aid… I know my first aid, I know my artificial resuscitation, my Heimlich… I’ll never (nor will my friends) be the ones running around yelling “someone help!!!!”

Does this mean were something special and crave attention. No, it means that in my world, men act, we stand on the wall and the others… the Steves… can mock and disdain all they want.

It is so because most people lead a safe and protective life thanks to my friends in the military, law enforcement, as first responders, medical personnel, firefighters while most males have never had to defend their Country, families or themselves and ironically are the first to ridicule those who have made their low-risk, no-risk lives possible.

So in honor of Robbie Burns Day…….

Here’s tae us
Wha’s like us
Damn few,
And they’re a’ deid
Mair’s the pity!

May those who live truly be always believed,
And those who deceive us be always deceived.
Here’s to the men of all classes,
Who through lasses and glasses
Will make themselves asses!

Then let us toast John Barleycorn,
Each man a glass in hand
Andy may his great prosperity
Ne’er fail in old Scotland!

Volunteer coordinator for veterans support network in North Texas. Now retired from his private psychotherapy practice, I specialized in the diagnosis and treatment posttraumatic stress, working with victim assistance programs, veterans and the Veterans Administration for over 20 years. After being wounded in action in Vietnam, I was medically retired from the Marine Corps and know first hand many of the readjustment difficulties and psychological stresses experienced by today's OIF and OEF veterans. I am available, at minimal cost, to speak at your functions on several subjects including veterans issues, Vietnam, the Medal of Honor, Posttraumatic Stress Disorder and critical incident debriefings.
View all posts by Gary Alexander →
This entry was posted in Heroes, Liberty Constitution, Marine Corps, Medal of Honor, Military, Politics, Second Amendment, Uncategorized, Veterans, War. Bookmark the permalink.