He who pays the piper calls the tune

Posted on February 8, 2016 by Gary Alexander 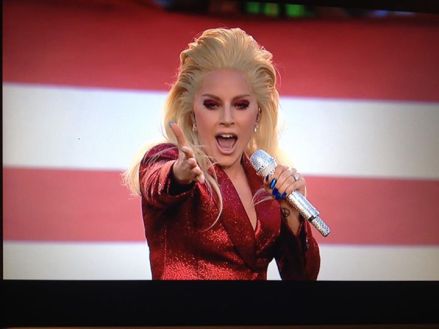 Last night during the Super Bowl I found myself in a pitched Face Book battle in which I was one again cast as Leonidas in the narrow pass of Thermopylae with scant few fellow Spartans.

At the mouth of the pass was the warbling Lady Ga-Ga and her legions of followers. I’ve heard better renditions of our National Anthem, and I’ve heard and seen far worse; Rosie O’Donnell’s intended disrespect to America a couple of decades ago doesn’t count as singing of any kind, it was just what one would expect from a far left gluttonous blob.

The history of those making poor attempts or worse, Obama-like (“It’s All About Me”) efforts to sing the Star-Spangled Banner is littered with vocal fakery, screeching and scores of renditions best forgotten.

I do not need, want or appreciate the zydeco, hip hop or bubble-gum pop versions of my Nation’s Anthem.

It’s the song, not the singer

These singers wouldn’t be behind the mic at the Worlds Series or other such national venues had they no ego… that’s not the point, it’s can they rein in that massive ego for two minutes to honor America, our flag and those who have died under its colors?

Two minutes… just sing it as its written; what gives you the right to re-write our National Anthem? It belongs to the all Americans, not to pampered, millionaire vocalists.

Whitney Houston I think fulfilled those simple requirements and made an obvious effort, given her vocal range, to keep the number of extraneous notes at a minimum. She did not yodel the Anthem as I’ve heard many lesser talents like Mariah Carey does; she is the epitome of what I detest about those who use the Star spangled banner for their own self aggrandizement.

I believe Actor Kelsey Grammer’s rich baritone version is an example of  how the Anthem should be sung….  thoughtful, somber and triumphant. It fits like a glove.

he Anthem
The Anthem is a call to arms, not urgent, yet far from up tempo.

The US Flag Code instructs: “The Flag should be raised briskly and lowered slowly and ceremoniously”; the music should match exactly how the National Colors are raised.

It was written in “the dawn’s early light” by a temporary American POW of the British during the night of September 13–14, 1814, as the bombardment of Fort McHenry continued the Battle of Baltimore.

It was and remains a patriotic poem inspiring sacrifice and optimism for a young republic now in its fourth century.

Having read 40 or 50 of the Face Book comments from people who disagreed with me, it was clear that they treated it as a song with little additional thought, like God Bless America or White Christmas. Ms. Ga or Ga-Ga was said to have “rocked” the National Anthem, so it goes for such people who haven’t a deep reverence for the subject at hand.

They are the people who keeps their hands in their pockets, cap on and/or wave at the TV cameras or start shouting and clapping when the singer hits ” o’re the lannnnnd of the freeeeeaaeaeae, and the hooooommm of thaaaaaaa….”

The correct way to “honor the flag” as the colors are presented and the National Anthem played is the following:

You assume the position of attention as best you can.

BI coecause I am a Marine I do what I’ve always done; me to attention, bring my boot heels together and spread my feet at 45-degree angles.

My fingers are curled, my thumbs touching the side of my index fingers and aligned with the outboard seams of my trousers. I look straight ahead or in the direction of the nearest US flag

If I am wearing a cap I render a hand salute if appropriate, otherwise I’ll remove my cap and place it over my heart.

I try to ignore those who do none of this and are talking and texting and eating and drinking and who will probably nonetheless vote.

As the anthem plays I remember all the places and circumstance I have heard the National Anthem played…. boot camp graduation, the morning colors on every base I’ve been aboard, Okinawa, Vietnam, US Naval Hospitals in DaNang, Japan and around the United States, memorial services and funerals of my many veteran friends.

I think of the din of battle and the quiet of a monsoon night and the long, long hours before morning.

I don’t think much about musicians, singers and whether or not they “rocked” anything, and how patriotic they are for singing or playing… funny, I thought to be patriotic, it had to cost your something… sweat, blood, tears?  VA Hospital/retirement home visits? “Care packages” for the troops?

……. something more than clapping or a yelling a dreadful “woo-hoo” because someone needed to sing her version of Mr. Key’s verses?

And God bless you Mr. Key for giving us America’s National Anthem.

Volunteer coordinator for veterans support network in North Texas. Now retired from his private psychotherapy practice, I specialized in the diagnosis and treatment posttraumatic stress, working with victim assistance programs, veterans and the Veterans Administration for over 20 years. After being wounded in action in Vietnam, I was medically retired from the Marine Corps and know first hand many of the readjustment difficulties and psychological stresses experienced by today's OIF and OEF veterans. I am available, at minimal cost, to speak at your functions on several subjects including veterans issues, Vietnam, the Medal of Honor, Posttraumatic Stress Disorder and critical incident debriefings.
View all posts by Gary Alexander →
This entry was posted in Liberty Constitution, Marine Corps, Military, Music, Patriotism, Veterans, War. Bookmark the permalink.

10 Responses to He who pays the piper calls the tune