As a psychotherapist, I’ve never believed in or advocated a geographical fix for ones problems… everywhere you go, there you are.

However, sometimes discretion is the better part of valor and living to fight another day is paramount.  Thus I find myself in Texas after most of my life in God’s Country, which we all know is Colorado. 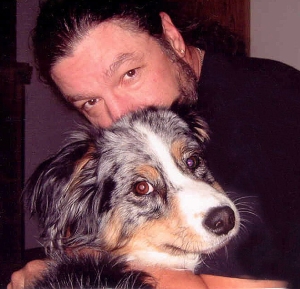 My best friends, my beloved Tripoli (whom I lost four years ago), Sparky, Cooper and Jack have bounced around with me the last several years and they have adjusted as only dogs can to a variety of living locales, situations and surroundings. I’ve done pretty well, but not so well as they.

About a year and a half ago we became a fire-team. A young Marine was in a fix… headed to Pensacola for flight school and could not take his Blue Merle Aussie (like Tripoli) with him; well, I was done… an Aussie, a fellow jarhead in need, and whatthehell… four’s not much different from three, no?

Reporter, media relations manager, government worker, car salesman and therapist; obviously there is no gold watch or golden parachute in my future… but it has been interesting and I’ve met a lot of fascinating people. Started my own private practice in 1990 and I cannot imagine why I every worked for someone else; obviously, it’s not in my nature.

As a former editor put it… “He’s great at the things he’s interested in.” I think you can see he was working hard at being positive, yet truthful in the conversation with my next boss. That’s all you can ask of a man.

“Gary is capable of much better work if he would apply himself.” – virtually half my teachers from 7th grade through my undergrad years had variations on the theme.

Now it’s fashionable to claim attention deficit disorder out of the gate… I didn’t know it until a few years ago… when I uh, …. I’ve always wanted to build a kit plane like one of those Burt Rutan designs…..

See what I mean?

Anyway, it always seems that there’s something more interesting… right.. over… there.

Thus, no one was more surprised that I that I earned a masters degree; I’m sure some of my former teachers would doubt it.

The most important thing I ever did was join the Marine Corps in 1968… the Corps took the raw material and shaped me for the rest of my life. I am eternally grateful. I got an early exit from Vietnam 18 months later courtesy of those little black pajama-clad bastards… cost me eight months in various hospitals but given all that, I’d do it all over, exactly the same way, except I’d try to be a better Marine.

That, of course was in the Sixties; and I’ve been at war with my generation… the so-called Baby Boomers… ever since.

By the time we all shuffle off this mortal coil we will be hated by those behind us for we have been the least grateful, most self-absorbed and largely silly people since perhaps the Roaring Twenties.

After we were in charge, our first master stroke was the election of Bill Clinton, one of the more mediocre presidents of last century.

Please forgive us, and shame on those older and younger who voted for the buffoon. He is one of us… I am sorry.

However, we did make up for that mostly with George Bush; history will prove me right.

And now, we have a socialist buffoon for POTUS… thanks, you 68 million numb-skulls; that lets my generation off the hook; The Obamanation is worse than Carter, Nixon and Clinton combined.

Hyphenated-Americans have no place in America, and neither do illegal aliens.

An increasing number of Republicans… aren’t.

Yep, we live in a world gone mad when the Pope and Christ are ridiculed, their images desecrated and banned from school, but if you try that with Mohammad, his followers will kill you and the ACLU and liberals will send them a mouthpiece before your blood dries.

… and it’s no longer questionable whether or not your own government would help you.

Huge numbers of our countrymen dissolve into a pathetic puddles when confronted with Swine flu, Y2K or the or rumors of a toilet paper shortage. Should we ever be invaded, the fifth column in this country and the news media would sell you down the river for an extra piece of bread.

We in many ways have become a frivolous nation;  essentially held up like stalwart poles do a tent… a very large area supported and sheltered by only a handful of strong and dedicated warriors.