It’s coming because you didn’t stop it… but don’t plead ignorance; you must plead stupid.

In just about seven weeks, people will be able to start buying Obamacare-approved insurance plans through the new health care “exchanges”.

But already, Senate Majority Leader Harry Reid is predicting those plans, and the whole system of distributing them, will eventually be moot.

Reid said he thinks the country has to “work our way past” insurance-based health care…. and into the clutches of “single-payer health care”.

In other words if this leviathan is not killed in its cradle……. you will have (not health insurance) but health care directly from the same people who have run our national debt to approaching $20 trillion and cannot get out of its own bloated way.

In other words…… welcome to the VA; I know of what I speak.

Asked the office manager if I could just catch my doc or any doc between appts. to simply look down my throat. Absolutely not, not no way, not no how… Nobody gets into see the Wizard. 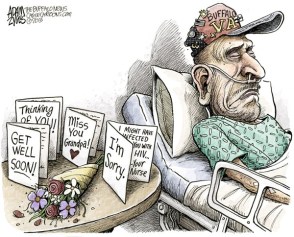 I replied that “I bet I could see a doc if I fell on the floor here and began screaming that I can’t breath.”

People actually do “narrow their eyes”.

I left, drove back home and got in to see a local doc I’d never seen before in an hour… $50 for appointment and $17 for ‘script.

While waiting I got a call from the VA clinic… they could get me in in an hour and a half.

Back on the elevator and to the clinic… closed. Luckily I ran into a staffer who had checked me in an hour before. She said she’d take care of it … back to pharm; after 20 more minutes and and now facing rush hour traffic, I said screw it and drove home.

The hole in my jaw eventually got infected and I self medicated with bourbon… a week later I got my anti-bios and pain meds in the mail.

So the appointment was cancelled, as was a half-day’s work and then there was the cost of gasoline.

I self medicated with bourbon. This is why VA hospitals have armed federal cops.

But it will be worse for you…. M. Single-Payer.

Why? Because at least the VA has a stand alone, small community clinic system as an alternative to the hospitals. Single-payer health care doesn’t have any hospital or clinic system. Most hospitals… and most major hospitals are owned by churches and synagogues, and other charitable organizations.

Where will all you government-dependent patients go?

Of course, my fear is they will dump everyone on the VA system…. along with the leeches of society, including 11 million illegal aliens.

So, if you voted for Obama and/or support this kind of medical care…. I’m glad the same thing will soon happen to you….but it’ll be worse than the VA experience.

Why? Because at least the VA has had 85 years of running single-payer hospitals, just to get it running like the above examples. But your health care will be run by health care experts….. the IRS.

But hey… come on over for a shot of bourbon anyway. 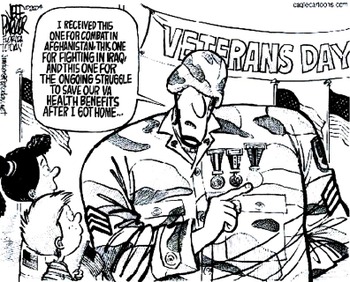 Volunteer coordinator for veterans support network in North Texas. Now retired from his private psychotherapy practice, I specialized in the diagnosis and treatment posttraumatic stress, working with victim assistance programs, veterans and the Veterans Administration for over 20 years. After being wounded in action in Vietnam, I was medically retired from the Marine Corps and know first hand many of the readjustment difficulties and psychological stresses experienced by today's OIF and OEF veterans. I am available, at minimal cost, to speak at your functions on several subjects including veterans issues, Vietnam, the Medal of Honor, Posttraumatic Stress Disorder and critical incident debriefings.
View all posts by Gary Alexander →
This entry was posted in Economy, Health, Military, Veterans. Bookmark the permalink.

6 Responses to It’s coming because you didn’t stop it… but don’t plead ignorance; you must plead stupid.